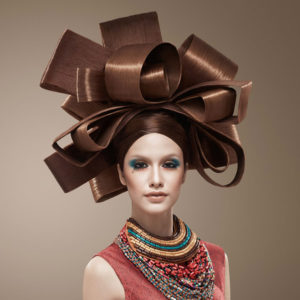 Originally, African women wear head-tie by tying the knots of a fabric on the crown of their head just like a queen wearing her crown – it is to them a symbol of beauty and elegance. In West and Southern Africa, head tie functions as fashion item, flaunting the art of African women’s beauty.
History lists the Baroque period as one of the periods flooded with artistic style from 17th to 18th century. During this era a new trend of hair was spreading, embracing a curly up-do with great degrees of height. This hairstyle is to be known as Fontange, originated from a name of a Baroque hatter, Fontange à la Sultane.

Despite differences in both styles, the marriage between the two results in an amazing new look. Instead of rigid curls, AFROQUE transforms a straight and smooth hairstyle into big ribbon petals with complexity of an African turban as it towers over the head similar to the bouffant hair-do during the Baroque period, offering a chic and elegant Haute Couture look.